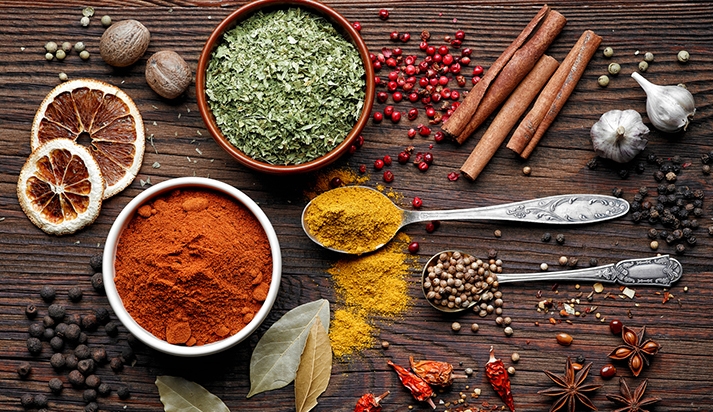 In the past they were considered precious goods, and in some cases even carriers of particular powers.
Every aroma and every spice has an immense power: that of marrying and enhancing the personality and taste of the dishes, without covering and distorting the flavors.

GINGER
Ginger is versatile and therefore very appreciated in the kitchen, thanks above all to its beneficial properties. For the benefits it brings, ginger is considered an almost miraculous root, capable of rejuvenating the body and counteracting many ailments. In fact, it has anti-inflammatory and digestive properties and is very effective against nausea, dizziness and pains typical of arthritis. It is also perfect for preparing winter herbal teas that help fight colds and flu symptoms, without forgetting that it is a fat-burning spice, which helps to reduce watery stagnations and cellulite. Together with lemon juice and extra virgin olive oil, the essential oil of ginger is an excellent natural antiseptic and used as a balm has a soothing action of the scalp, counteracting dandruff.

TURMERIC
The spice turmeric is a yellow powder obtained from the grinding of some plants belonging to the Zingiberaceae family (the same of Ginger). Due to its coloring capacity (yellow), turmeric is also known as "Indian saffron".
The active ingredient of turmeric is curcumin, which has a spicy, slightly bitterish, distinctly earthy flavor and a mustard-like odor.
For millennia, in the countries of origin, turmeric is used in most of the recipes; only recently, has found a considerable diffusion even in Western nations, considering its use in the formulation of curry and some sauces.

CINNAMON
With its characteristic spicy and sweet taste, cinnamon is one of the most common spices in the kitchen, since the nineteenth century. Its beneficial properties have been appreciated since the days of ancient Egypt and the Romans, as it has antifungal, antioxidant and anti-flu functions, useful in case of colds and sore throats. It also fights cholesterol and helps to regulate blood sugar levels (useful for diabetics), also alleviating the sense of nervous hunger.

NAILS OF GAROFANO
Also used in the preparation of sangria, they are appreciated for their digestive, toning and analgesic qualities, so that those suffering from toothache are advised to chew a clove. It's not all. In fact, they contain vitamin A, C and flavonoids, so they are considered natural antioxidants and anti-inflammatories, also useful for circulation.

NUTMEG
The nutmeg is native to New Guinea and the Moluccas, Indonesian islands also known as "Spice islands", from which also originates another very common spice in our kitchens, cloves.
Nutmeg has also recognized narcotic and psychoactive properties, mainly due to the presence of two compounds, myristic acid and helicin. If ingested in high doses (10 to 20 g), dissolved in water or drunk as tea, it causes impaired consciousness and can also cause visual hallucinations.

VANILLA
Vanilla is an orchid native to Mexico that yields edible fruits: the pods. Vanilla is a natural antiseptic but also a precious soothing, it is very useful to combat stress and defeat insomnia. A good warm milk flavored with vanilla is in fact an excellent remedy for those who have difficulty getting to sleep. Vanilla has always been attributed to aphrodisiac virtues. The use of vanilla in the kitchen dates back to the dawn of time, when the Aztecs combined it with cocoa to obtain a sweet drink, the ancestor of our chocolate flavored with vanilla. Vanilla is mainly used in confectionery preparations, to flavor sugar, chocolate, milk and liqueurs and the vanilla cream is one of the main ingredients of many cakes and desserts.

ORANGE FLOWERS
When we talk about orange blossom we can not think of marriages, and it is no coincidence, considering that the flowers of this plant are white and also have an excellent fragrance, so they are often used at weddings for centerpieces. However, orange flowers also have remarkable therapeutic properties.
From the flowers of this plant you get a water that apparently has considerable calming and antispasmodic powers, and is therefore a panacea for stress, for those suffering from the side effects of anxiety, and also and especially for those suffering from insomnia . The orange blossom aroma is used in the kitchen to enhance the aromas of cakes and pies. Ideal for the preparation of the typical "Neapolitan Pastiera".

BERGAMOT
Bergamot (citrus bergamia) is the fruit of a plant belonging to the rutaceae family. Despite being of Asian origins, today it is cultivated a lot in southern Italy, thanks to favorable climatic conditions. Its beneficial properties for our body have been witnessed since 1800.
It owes its name to the Turks who called it beg armudi, that is the 'pear of the lord' due to its characteristic shape. Unlike lime, this citrus has found an optimal climate in the Mediterranean and Italy - in particular Calabria - is one of the largest producers.