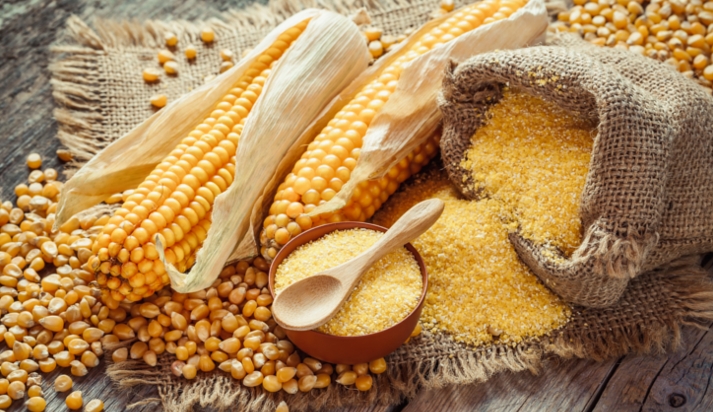 The secrets of corn

The corn, the plant with the color of gold, considered the king of the table for the high content of iron, phosphorus and potassium.

A bit of history

Maize was born millennia ago in Mexico and was at the base of the Maya diet. It was Christopher Columbus who imported it into Europe. It is hypothesized that the word "maize" comes from "Mahiz", the name by which the natives Arahuaco, whom Christopher Columbus met on the island called Hispaniola, indicated this element.
The spread of corn in Italy begins around the first half of 1500, probably thanks to some variety from the Balkans. The first Italian regions to introduce the Corn, were those of the Po Valley, thanks to the favorable climate. In Italy, it began to be used to obtain flour, a use unknown to the American natives who consumed it roasted or boiled, whole or with grains, but not in the form of polenta. Consumed as polenta and bread, corn soon became the staple food in the Po Valley farmers, supplanting millet and panic.

In botany, maize is known as Zea mais: a herbaceous plant belonging to the Graminaceae family, native to Central America and currently widespread and cultivated a little around the world. The botanical importance is attributed to the stigmas, which hang outside the bracts forming a kind of beard. Few are aware of the fact that the common "panicle", in reality is a spike: more precisely, the male inflorescences make up a terminal panicle, while the female ones (in the same plant) form a spike, surrounded by large bracts.
Corn, after rice and wheat, has won the primacy of human nutrition.
From the chemical point of view, from the corn are obtained essential oils, flavonoids, phytosterols, mucilage, tannins, alkaloids and potassium salts.
Corn flour is low in protein, rich in carbohydrates but with low glycemic power, naturally gluten-free, it is an energy food that slows down the absorption of sugars. Source of vitamin B1, contains iron, phosphorus, potassium and vitamin A.

He satisfies everyone at the table

Corn flour, naturally gluten-free, has a great history in Italian food, we only think of a very famous regional dish, polenta. As we know, celiac disease is the most known gluten intolerance. People with celiac disease can consume foods based on cornmeal, just because the cereal does not form gluten in contact with water: corn, in fact, contains little quantity of gliadin (gluten-component protein), but is rich in alanine amino acids and leucine. Precisely for this particular composition, gluten in corn is not formed.

Different granulometries and therefore cooking times are also different.
Here is a small guide on the different types. The craved flour is coarse-grained corn flour, it is used to obtain particularly tasty polenta and other dishes of considerable thickness for the palate. The polenta that is obtained with the flour bramata is a raw and wrinkled polenta, which requires a cooking time twice the previous one. The term "craved" owes its name to the process of husking the rice (shelling of the paddy rice: in the case of corn, the husking is the operation prior to grinding). White corn flour is little known in Italy, used above all in Latin America. The white corn flour undergoes a very ancient process, called Nixtamalization, this procedure enriches the nutritional profile of corn flour. The corn flour contains vitamin B group and group PP but not assimilable by the human body, through a process of Nixtamalization increases the bioavailability of vitamins of group B and PP. White cornmeal is used for the preparation of tortillas, arepas and empanadas.
Stone-ground cornmeal preserves part of the hull and germ, the most external parts of the corn kernel. All the other corn flours see the removal of the outer layers of corn, for this reason, stone-ground cornmeal can be considered an almost integral form. Stone-ground corn flour is more perishable and requires low temperatures for storage. It has a fuller flavor and is richer in terms of nutritional properties. There are also pre-cooked corn flours (commercially known as "instant flours"), whose cooking times are decidedly lower because they are subjected to a preliminary steam cooking. In our assortment there are both yellow instant polenta and white instant polenta. With corn flour you get products that are certainly very palatable and tasty: do not forget, however, that polenta, obtained from corn, has been considered for a long time the food of the poor, as extremely satiating and very cheap.
But with corn flour you do not just make polenta, but also twisted Mexican tortillas, crepes, sweets and much more.
Here you can find our recipes for tasty second courses based on polenta, but also tasty biscuits with corn flour and a corn bread with sunflower seeds.